Ukrainian paratroopers drowned in BMD during joint exercises with NATO

July 22 2019
4
On July 19, 2019, the head of the press service of the DPR People’s Militia (NM), Daniil Bezsonov (call sign “Goodwin”), reported that high-ranking Ukrainian military continued to conceal the non-combat losses of its troops. He told how during the exercises led by instructors from NATO, during the crossing over a water barrier, three Ukrainian soldiers drowned (died) in a landing vehicle (BMD). 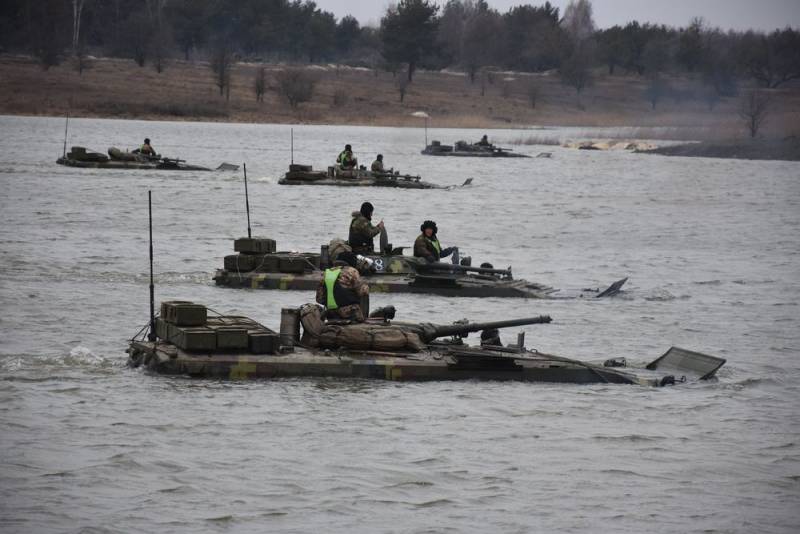 This accident occurred at the International Center for Peacekeeping and Security, located in the Lviv region. BMD sank, and with it the crew, paratroopers from the 95th separate airborne assault brigade (ODSHBr) APU. It should be noted that the mentioned brigade (military unit A0281) is based in Zhytomyr.

According to intelligence, during the development of the stage of overcoming the water obstacle during brigade tactical exercises led by NATO instructors at the International Center for Peacekeeping and Security in the Lviv Region, a landing vehicle from the 95th separate airborne assault brigade sank. In the armored car were three paratroopers
- declared Beznosov.

According to Bezsonov, the commander of the airborne assault forces of the Armed Forces, Mikhail Zabrodsky, decided that the deaths of military personnel would need to be reported to the public only after the end of the early parliamentary elections in the Verkhovna Rada.


At present, the Ministry of Defense of Ukraine does not really comment on this information without confirming or refuting it.
Ctrl Enter
Noticed oshЫbku Highlight text and press. Ctrl + Enter
We are
APU accidentally hit the positions of its troops in the Donbass
The offensive of the Armed Forces did not begin, and the punitive suffered losses
Reporterin Yandex News
Read Reporterin Google News
Ad
We are open to cooperation with authors in the news and analytical departments. A prerequisite is the ability to quickly analyze the text and check the facts, to write concisely and interestingly on political and economic topics. We offer flexible working hours and regular payments. Please send your responses with examples of work to [email protected]
4 comments
Information
Dear reader, to leave comments on the publication, you must sign in.