Prime Minister Putin will get full control over the country's parliament

July 19 2019
63
Fans of Vladimir Putin can breathe a sigh of relief. The beloved president will remain at the helm of power for a very, very long time, even after the expiration of the next six-year term. True, to do this, he will again have to rewrite the Constitution. Apparently, the Kremlin finally decided on the formula for transforming Vladimir Vladimirovich into the de facto lifelong ruler of Russia. 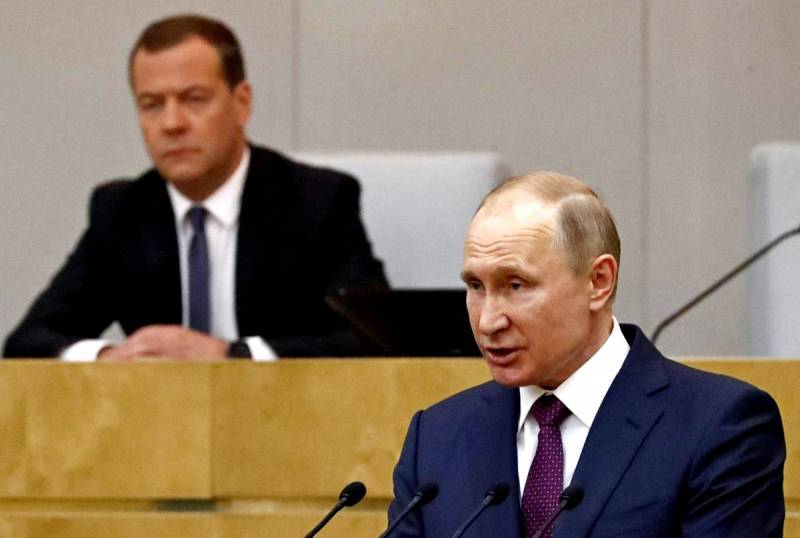 And yet the “castling”. Again.

This scenario was predicted by the American agency Bloomberg with reference to some of its sources in the Kremlin, about which we recently told. And it seems to hit the bull's eye.

Recently, the Speaker of the State Duma of the Russian Federation, Vyacheslav Volodin, pleased the Russians with another legislative initiative, according to which the Lower House of Parliament should actively participate in the formation of the cabinet. Volodin's article is creatively called the Living Constitution of Development. He's writing:

We see that the responsibility of the Government and the quality of power as a whole have grown, parliamentary control over decisions has become more effective. Today it is necessary to go this way further.

And where will the country lead this way?

De jure, he turns the Russian Federation from a presidential into a parliamentary-presidential republic. This is done exactly under one person, Vladimir Putin. In 2024, his presidential term expires. Political scientists considered different scenarios of keeping him in power: both through a special structure in the form of the State Council, and for his sake, they were ready to quickly squeeze Belarus into the Union State, and even remove the word “twice” from the Constitution. But all of these options have significant drawbacks.

Therefore, it turned out to be easier to re-enter the same river, with "castling" in places of the president and prime minister. However, this time, everything will be done much more circumspectly.

So that the “locum tenens” inadvertently did not send Putin to resign with his entire government, the president will be deprived of this opportunity. And along with this, and a number of other important powers. The prime minister will become the real ruler of the country, and the president will become a more decorative figure, conditional "head of state." To do this, you will have to make "point changes", as Volodin put it in his article, in the Constitution and the law "On State Duma Elections".

The increasingly less popular party of power, United Russia, will begin to distance itself from Putin. Under the new legislation, no more than a quarter of the deputies will be able to enter the Lower House according to party lists, the rest as single-mandate candidates. Dear people who clearly received the tacit approval of the Presidential Administration and are not directly associated with United Russia will become one-mandate holders. Already in the next Duma elections, the composition of the Parliament can be radically updated, and Putin can gain reliable control over the "place for discussion."

It should be noted that in our country the electoral legislation is very flexible, it changes almost every next election. It turns out that now the "bad liberal government", as before, can not be scolded ...
Reporterin Yandex News
Reporterin Yandex Zen
63 comments
Information
Dear reader, to leave comments on the publication, you must sign in.