Russian anti-aircraft dome over Turkey: why is it a real breakthrough

July 15 2019
23
One after the other, the Russian airborne military transport aircraft delivering components of the Triumph S-400 air defense system it purchased to Turkey seem to have put an end to the long-running dispute between Ankara and Washington over the acquisition by the Turkish side of Russian weapons systems. However, this seems only at first glance. This is not the end of the story, but the beginning of a new chapter. Rather, even a few chapters. The United States is by no means going to dismiss its recent allies of their “disobedience” and “self-will”. Turkey, for sure, will have to seriously review its own foreign policies. And our country opens with this delivery a new page in its victorious expansion in the arms market. Let’s try to find out more specifically why this arms deal is so important - both for Russia and for Turkey. 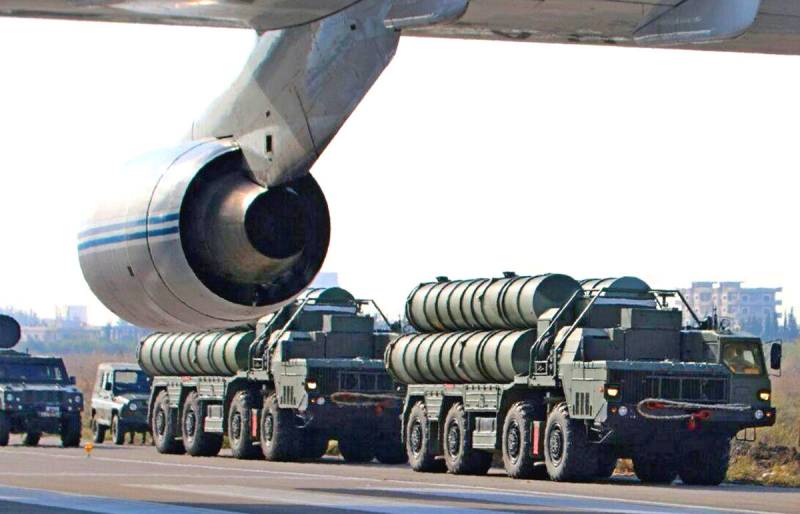 As a matter of fact, sending Triumphs to Turkey was not the first international deal of this kind for our country. Prior to that, they were already sold to China. However, this could not be considered something out of the ordinary: the Celestial Empire is not a member of NATO, the United States is not listed among allies in any case, and the Americans introduced against it for this purchase in accordance with the CAATSA Act of 2017 sanctions to Beijing - what a dragon shot. The Chinese, themselves, have recently announced that they intend to impose sanctions against arms manufacturers from the United States - for ever-increasing military supplies to Taiwan. With Turkey, the matter is completely different. To this day, it has not only been one of the exemplary members of the North Atlantic Alliance, but was, one might say, its plenipotentiary in its region, the link between NATO for Europe and Asia. And suddenly - such a sharp "turn"! But the fact of the matter is that all of a sudden ...

The story of Ankara’s attempt to reliably “close” its sky from possible attacks does not last for several years, but for decades. What in this "saga" just was not! First of all, Turkey’s long and humiliating attempts to beg its own allies then seemed to them the most reliable Patriot air defense systems. These systems, at best, were located on the territory of the country on a temporary basis (in 1990, 2000 and 2012), and then exported back home “as unnecessary”. Moreover, whether there were real reasons for protecting the Turkish borders, they didn’t decide at all in Ankara, but in Washington and NATO headquarters ... There were attempts to acquire Chinese air defense systems - HQ-9 systems, which are more or less successful analogs of the Russian S-300 air defense systems . However, allies in the Alliance menacingly said: “No!”, And in this case, the Turks obeyed. There is even an agreement signed by them with the arms concern Eurosam, according to which Turkey should receive its own air defense complex, developed jointly with the Europeans on the basis of SAMP / T air defense systems. However - the street is going, someday it will be ... 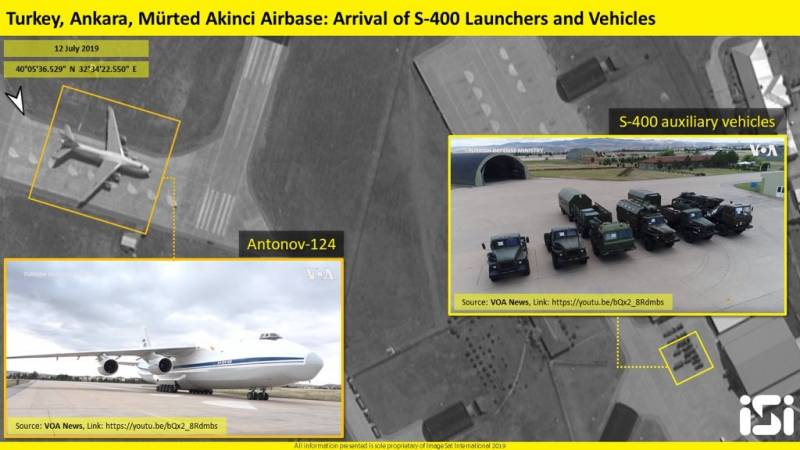 An-124 and S-400 air defense system elements at the Turkish air base “Akıncı”
Ankara’s patience finally burst and there, finally, they came to an unshakable decision - the Russian Triumphs will defend the Turkish sky. At the same time, the United States would have been glad to make the Turks happy with its Patriot, but it wasn’t there. There is reason to believe that the prudent Recep Erdogan, who intends first of all to "close" the sky of his own capital from possible attacks, categorically does not want to rely on American air defense systems in this matter, rightly fearing that they might "fail" in the most inappropriate moment. Or rather, it’s suitable, but for Washington, for which this unpredictable leader has long been standing with a bone in his throat. In 2016, an air attack on his own presidential palace was more than enough for such suspicions. It is very significant that the head of state from a certain moment counts the Americans not among military allies, but among the most likely opponents in an armed conflict. He categorically no longer trusts the United States, unlike Russia - despite all the difficulties in relations between our countries.

Why is this a real breakthrough

However, according to informed analysts, the point here is not only in trust in Washington, completely lost by Ankara. The accomplished, despite everything, truly titanic confrontation of the United States, the deal clearly indicates that their geopolitical influence in the Middle East today is much less than what Russia has. There is no need to talk about the “collective West” either - in Germany itself they are already rushing to say that Turkey is completely consciously passing the “point of no return”, after which, in fact, it will leave the ranks of the countries that are among them. She makes a choice in favor of Russia, clearly realizing the whole complex of consequences, including potentially negative ones. And yet he does! By the way, the Americans can say a big “thank you” for just such a development of the situation to their own allies, who have recently started to think about Israel. By posting a spectacular photo on Twitter against the backdrop of the F-35, with the caption “Our fighters can reach anywhere in the Middle East!”, The prime minister (and the head of the defense department, part-time) Benjamin Netanyahu, of course, first of all wanted to “convey hi to Tehran and Damascus. However, in Ankara, it seems, they also heard ... 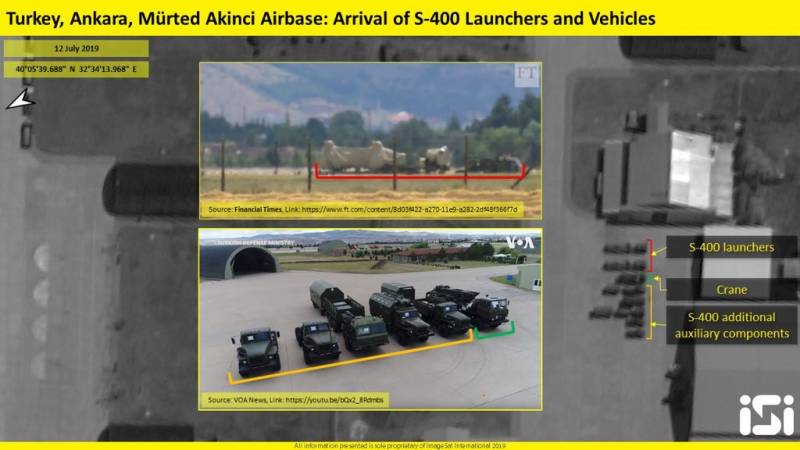 Elements of S-400 air defense systems at the Turkish air base “Akıncı”
Against the background of such statements, in those days when the US carrier armada was pulled back to the Persian Gulf, the issue of security, and, above all, the protection of their own airspace, is extremely acute for all states of the Middle East. And this is where truly unlimited possibilities open up for Russia! No wonder Leonid Slutsky, the head of the Russian State Duma’s committee on international affairs, commenting on the start of deliveries of S-400 systems to Turkey, stated bluntly that this was “only the first swallow”. The volume of defense cooperation between our country and the states of the Middle East region, according to the parliamentarian, is already "very large" and will continue to "increase in every way". If you believe Mr. Slutsky, we are talking about the sale to interested countries (which are more than enough today) not only of the "Triumphs", but also of "more modern weapons." But this is already very interesting! Indeed, what could be discussed in this case? After all, the latest S-500 air defense systems, according to the statement of the head of the Rostec Corporation Sergey Chemezov, will not be sold literally “for any money” in the foreseeable future? So what then?

The most possible answer has already been calculated even in the West. So, the German magazine Stern is sounding the alarm:

Russians are about to turn the entire invisible aircraft market!

In view of the fact, there is, of course, the fifth-generation Russian fighter Su-57, which causes quite understandable concern in NATO countries. Still, all hopes that this combat vehicle will never be adopted by the Russian Air Force, or, in the best case, will appear there in single copies, went to ashes after it was announced: no later than 2028 on combat duty three squadrons of the latest “dry” will immediately enter! Journalists sarcastically predict that the Franco-German project of the European stealth fighter at this point will reach the maximum stage of creating a demonstration model and draw the logical conclusion that, “in which case”, there will be absolutely nothing to oppose the European countries of NATO with Russians in the air. No less unpleasant for the West, in their opinion, the result of the successful development of the Su-57 is that this fighter will definitely surpass its competitors not only in combat qualities, but also in price. Based on the figures voiced in the Russian press, the Germans today claim that "with an estimated cost of 31 million euros per aircraft," these machines will inevitably "become a super-profitable product on the world arms market." By the way, Turkey is already in full swing thinking about their acquisition - and it’s not alone ...

After publications poured in the world media one after another, counting arriving at the Ruslana Turkish military bases with the Triumphs on board, they said in Washington that they were “completely up to date with the supplies.” And they are already preparing an answer - as it became known, the US Department of State and the Pentagon have developed as many as three options for new anti-Turkish sanctions, and so far the White House is choosing which one to apply. As they decide, they will immediately announce it ... Anyway, the actions of the United States in this case fully fit into the well-known proverb about waving fists after a fight. Everyone in the world understands that the United States lost this battle to Russia. Here is another extremely important and very positive result of the “Turkish breakthrough” of our Triumphs.
Ctrl Enter
Noticed oshЫbku Highlight text and press. Ctrl + Enter
We are
Putin's phenomenon is Russia's main problem
Ten "defeats" of Putin
Reporterin Yandex News
Read Reporterin Google News
Ad
We are open to cooperation with authors in the news and analytical departments. A prerequisite is the ability to quickly analyze the text and check the facts, to write concisely and interestingly on political and economic topics. We offer flexible working hours and regular payments. Please send your responses with examples of work to [email protected]
23 comments
Information
Dear reader, to leave comments on the publication, you must sign in.