July 11 2019
0
The American company Virgin Orbit successfully conducted the first flight tests of its Cosmic Girl aircraft, including the launch of the LauncherOne launcher. Prior to this, the device took to the air at the end of 2018 with a mass-scale model of the aforementioned missile on board. 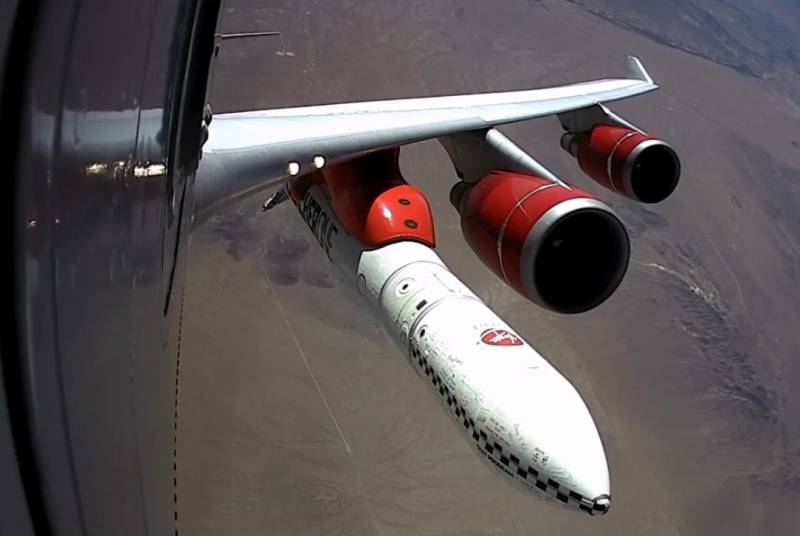 It is worth noting that Cosmic Girl is not a specialized aircraft. The device is based on the passenger airliner Boeing 747-400. Under the left wing of the aircraft, next to the engine, they placed a pylon for mounting a rocket, which, after reaching a height of about 10 km, is separated from its “winged carrier” and continues to rise through its own engine.

It is worth noting that the launch of missiles from an airplane has several advantages over launches from ground-based spaceports and water platforms. So, due to the fact that the rocket does not have to independently overcome the lower layers of the atmosphere, the aerodynamic load is reduced, which in turn saves fuel. In addition, when starting from a great height, there are no sharp fluctuations in pressure, on which the efficiency of rocket engines directly depends.

In recent tests, Virgin Orbit used a full-fledged LauncherOne rocket, to simulate fuel filled with water and antifreeze. After being disconnected from the aircraft, the carrier crashed at the Edwards Air Force Base. In turn, the crew of the aircraft reported that the separation of the apparatus was normal.

Now the developers have to conduct a thorough analysis of the data received from sensors installed on LauncherOne. A full-fledged launch of a rocket through Cosmic Girl, followed by orbit, may take place at the end of this year.
Ctrl Enter
Noticed oshЫbku Highlight text and press. Ctrl + Enter
We are
TOP-7 safest passenger aircraft in the world
A lesson for Russia: why did the largest airliner A380 “die”?
Reporterin Yandex News
Read Reporterin Google News
Information
Dear reader, to leave comments on the publication, you must sign in.